When is it Best to Hike in the Dolomites?

The best period for hiking in the Dolomites is from July through the middle of September, but some hut-to-hut itineraries are accessible from the second week of June through mid-October. The factors defining the hiking season and affecting the optimal choice of the dates in the Dolomites are the weather, winter snow, opening-closing dates of the huts and availability at huts.

Weather in the Dolomites - When to Go?

Weather is the key factor determining the starting and ending dates of the hiking season. In June, the conditions vary significantly from year to year, but the first half of June is in any case the time for experienced hikers. Normally, winter snow melts away at the altitudes below 2600 meters by the middle of June, but it often remains on shadowed slopes and at higher altitudes until the end of June. In high-altitude areas, such as the plateaus of Sella and Pale di San Martino, patches of winter snow can stay until the middle of July. 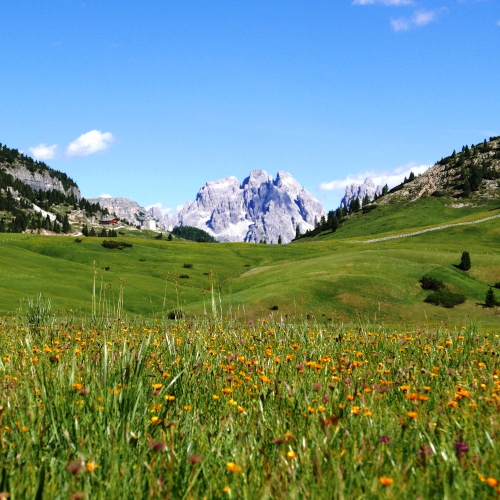 Heavy snowfalls late in spring are another risk for early hikers. Although very rarely, it can snow heavily in the first half of May as it happened in 2019 for the first time in more than 30 years. Most hut-to-hut itineraries remained inaccessible until the middle of June in 2019 as the trails above 2400 meters were blocked by snow. The itineraries running at moderate altitudes, such as Alta Via 1 North and Alpe di Siusi Trek, were passable from June 15 but required good prior hiking experience as hikers had to cross extended patches of snow on the route. Most other itineraries were accessible from June 22-25. Significant snow cover complicated hiking in Pale di San Martino until July 10.

It is not possible to reliably forecast the conditions in June until the middle of May, thus we recommend planning treks in the Dolomites after June 15 or preferably even after June 20. June is normally warm. Temperatures during the day typically vary between 12°C and 20°C at 2000 meters. Naturally, it is colder at night and at higher altitude - the temperature decreases by 0.6°C each 100 m of ascent. Weather can be unstable in June, but monthly precipitation in June is statistically comparable with the other summer months.

July and August in the Dolomites are normally sunny and warm. This is the peak of the hiking season statistically characterized by stable weather conditions. The weather in July and August is mostly defined by powerful north african anticyclones delivering hot air to Italy and the southern Alps, and thus to the Dolomites. Temperatures can reach 35°C in towns such as Trento and Bolzano which are at 200 meters of altitude. It can be hot in the Dolomites’ valleys too - a peak day temperature of almost 30°C is not unusual in the base camp locations such as Val di Fassa, Cortina d’Ampezzo and Val Gardena which are at altitude of 1200 - 1500 meters. However, nights are fresh even at this altitude. At 2000 meters, a normal temperature range is between 10°C at night and early morning to 20-23°C in the middle of a sunny day. The most typical day pattern is clear sky in the morning and accumulation of clouds early in the afternoon with an increasing probability of thunderstorms later in the afternoon and in the evening. This is why we recommend starting walking early in the morning, for example at 8 AM, to cover more than a half of the daily distance by lunchtime.

Clear sky in the morning, increasing probability of thunderstorms in the late afternoon - typical weather pattern in July and August in the Dolomites 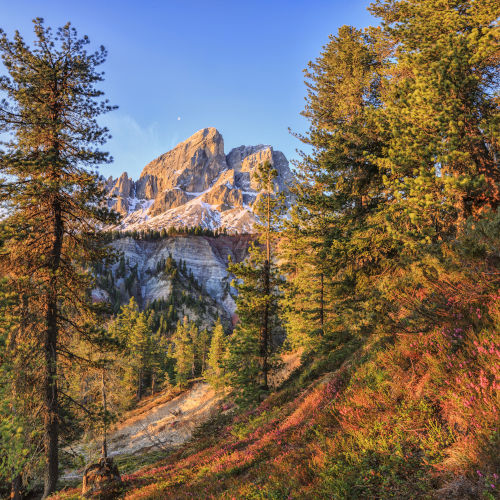 Dolomites in September: beautiful colors and hours of solitude at a time, but rising weather risks

October is the very end of the hiking season in the Dolomites. Alta Via 1 North and Alpe di Siusi are accessible until the middle of October while other hut-to-hut routes are not - most huts close in September. Probability of snow is higher than in September - this is the major risk at the end of the season. The number of days with precipitation is statistically higher too, although the total monthly precipitation in October is lower than in July and August. Typical temperatures at 2000 meters in the first half of October are around 8°C - 13°C during the day. At night, temperature can drop below the freezing point at 2000 meters - in October as well as in September. As a result, trails on shadowed slopes can be icy in the morning.

The opening and closing dates of the huts depend on the weather, because the latter factor regulates the number of hikers on the trails. Huts in the Dolomites are manned. They offer accommodation in dormitories and private rooms, facilities such as bathroom and hot shower, and boarding. Hut managers cannot afford staying open with too few guests, especially at the beginning and at the end of the hiking season because there are fixed maintenance costs. 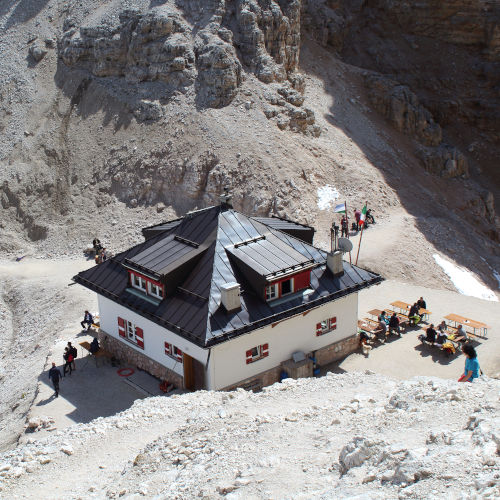 Most huts are open June 20 - September 20, but the huts along Alta Via 1, in the Fassa and Cortina Dolomites stay open longer

The majority of the huts in the Dolomites are property of the Italian Alpine Club (CAI). The Club defines the opening and closing dates for its huts. Most CAI huts open around June 20 and close around September 20. Some huts set at higher altitudes may be permitted to open later and close earlier. Managers of the CAI huts are free to open their huts earlier and close them later, i.e. they can choose to extend the opening period. Typically, most huts along the classic routes, such as Alta Via 1 and Fassa Dolomites, extend the season by 1-2 weeks at each end. The huts in the northern part of Alta Via 1 stay open until the middle of October. Some huts reopen just for weekends after the official closure date - it lets us schedule some of our treks late in the season, for example The Cortina Dolomites Trek.

In exceptional circumstances, huts may need to close earlier than the previously announced date but not before September 20

In addition to the CAI huts, there are a growing number of privately owned huts. Managers of private huts have more freedom in deciding on the opening and closing dates. They are not obliged to follow the CAI regulation but may have other commitments. It is not unusual that private huts open earlier and close later than the CAI huts in the same area. Often, private huts extend the season in case of good weather and thus higher demand for their service. Less frequently, private huts as well as CAI huts close earlier than planned due to early snow or technical issues caused by temperatures dropping below the freezing point.

Trail Traffic - When is it Lower?

There are never too many people on the trails connecting the huts in the Dolomites. The most frequently visited locations you will reach in a hut-to-hut trek are passes accessible on roads, areas easily accessible with ski lifts and the most famous landmarks such as Tre Cime and Lake Braies.

The Dolomites are most visited starting from the middle of July and until the last week of August. The most popular period is the two central weeks of August, approximately from 10 to 25 - varying from year to year depending on the calendar. It is Ferragosto - the Italian holiday period. The name originates from the latin “Feriae Augusti” which means the festivity of Augusto, in honor of Ottaviano Augusto, the first Roman emperor. Ferragosto has been celebrated since 18 BC in the Roman empire where it marked the end of the most intensive rural works. This tradition was maintained later in the Venetian Republic and other states on the territory of modern Italy. At present, it is the busiest period of the summer in Italy when there are visibly more people everywhere, and even in the mountains. We recommend choosing less visited areas and hiking routes in August, such as Brenta Dolomites or Alta Via 1 Southern Trek.